It was the deal that was supposed to set an example. 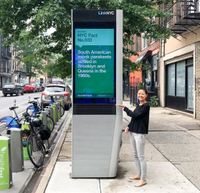 Now that example is a “how-not-to” instead of a how-to.

Link’s services are free to the public and come at no cost to taxpayers because it funds the deployment and maintenance by selling advertising on the kiosks’ 55″ displays. The company behind LinkNYC is CityBridge (under a franchise agreement granted by the City of New York).

But CityBridge stopped installing Links in the autumn of 2018, says New York City’s new commissioner of the Department of Information Technology and Telecommunications.

That left New York City with just 1800 Link kiosks, not the 4500 originally projected to be installed by mid-2019. And many of the Links that haven’t been installed were meant to service low-income neighborhoods, where residents are in greater need of free internet access.

And NYC is angry. “New Yorkers who’d benefit most from this service are not getting it, including thousands of people who live in districts that many of you represent, because CityBridge is delinquent,” the department’s commissioner, Jessica Tisch, told the City Council.

LinkNYC was also supposed to share ad revenue (an expected half a billion US dollars for New York City).

Uh, that didn’t exactly happen either.

It’s all the worse because CityBridge is a group of companies that includes Intersection, Qualcomm and CIVIQ Smartscapes. Even Google is an investor (via Alphabet’s Sidewalk Labs).

Link has supposedly invested $250 million to build out the kiosk network and provided more than $225 million in free wireless data to New Yorkers and its visitors.

In 2018, New York City had to agree to give the consortium more time to build out the network and share revenue with the city. In return, CityBridge promised it would be “on sound financial footing and fully capable of performing all remaining obligations under the agreement.”

But for the past year CityBridge has been trying to amend its agreement with City Hall– again.

“CityBridge is working with the City of New York on a plan to address the financial viability of LinkNYC,” a CityBridge spokesperson said in a statement.

That means no money until a new agreement is negotiated or the existing one is enforced legally.

In fairness to CityBridge, there were some unexpected problem in setting up this smart city service. Soon after the kiosks began appearing on city sidewalks, in 2016, the city administration requested to unplug internet access– in response to the volume of pornography being viewed on city sidewalks. And the large advertising screens have been repeatedly vandalized while some critics questioned the privacy issues around the data collected from passersby.

It seems the dream of city administrators for a smart city may be require smarter, more responsible citizens (and tourists).

Yet the public kiosk business has years of experience dealing with a wide range of citizen abuse and CityBridge should have been aware of this.

Maybe that’s why deputy commissioner Tisch says NYC would consider suing to enforce its contract with the firm.

“Our patience,” she was quoted as saying, “is up.”

This Article was first published by Digital Signage News.

← Prev: It’s a touchscreen, not a BBQ! Next: The Future of Retail is all about Flagship Stores and Brand Experiences →

The History of LED

Direct-view LED is often referred to as the new display technology on the block. Which is quite strange for a...