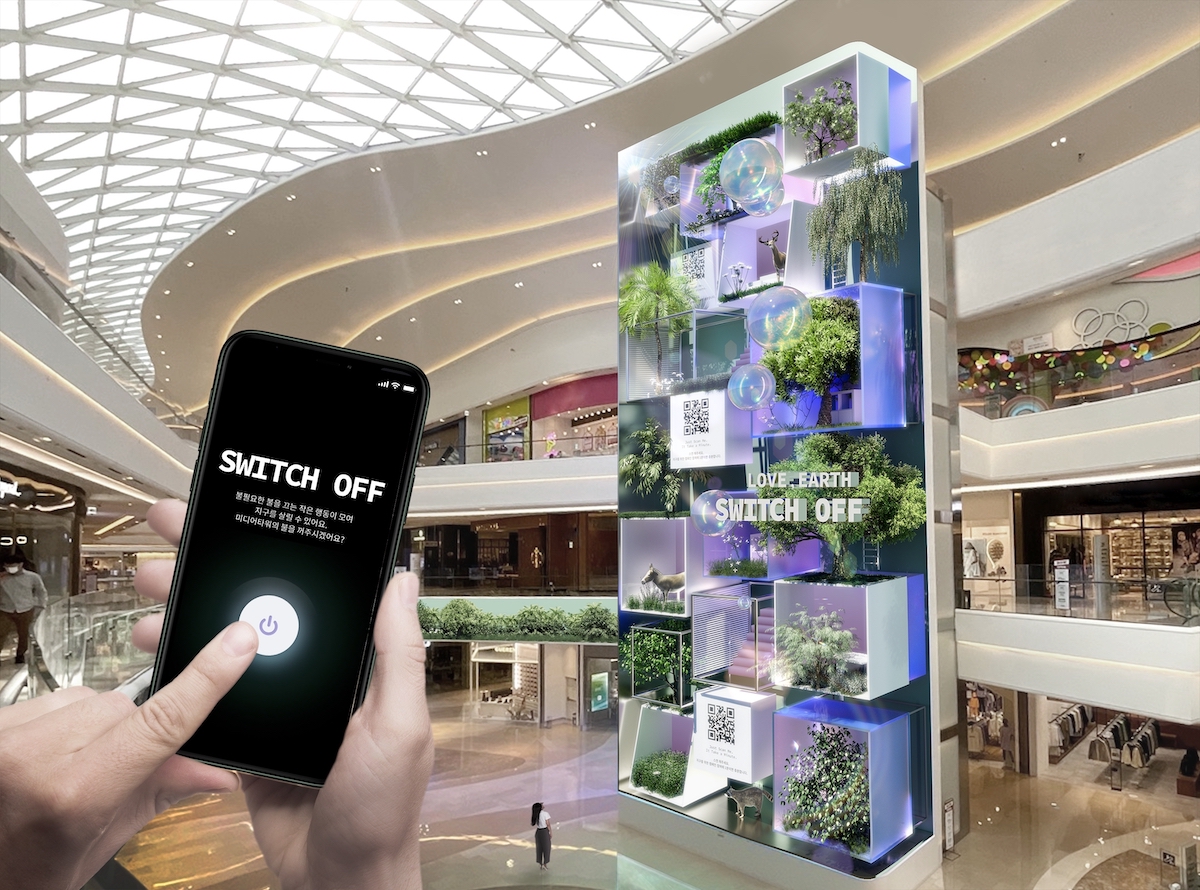 The press release borders on impenetrable, but the accompanying image for news about a short-term video wall creative piece in South Korea makes it worth noting.

The 22-metre-tall LED video tower in the central atrium of the Starfield Hanam shopping mall started running an art piece yesterday that is controlled, at least in part, by shopper smartphones. The work by the media art firm CUZ Inc. runs through Sunday.

LOVE EARTH, SWITCH OFF is a campaign aimed at increasing environmental awareness and conserving energy. When the audience turns off the light switch on a 22-meter-tall (72 feet) Media Tower using their mobile devices, an image showing the beautiful resurrection of the earth is displayed. With this, a message is delivered that something as trivial as turning off light can save the earth.

The participants can take photos of themselves through an AR filter and send the photos and their names for display on Media Tower. By participating in the campaign, the audience both exerts good influence on earth and experiences being a part of a media artwork.

The provided image is conceptual by the looks of it, and I can’t find anything showing the piece in action – photos or video – so I am not entirely sure what the “resurrection of Mother Nature” looks like on this video wall. That noted, the idea of extending controls to this content piece is interesting, as is the extension to augmented reality.

This is a good example, in PR terms, of the value of not pushing out announcements until the material is available that shows what happens, and then running the written material by some uninvolved people to see if they can make heads or tails of it (I recognize there may be a language barrier thing here, as well, but if you are going to push out PR to an English audience, ensure it makes sense to the intended recipients and answers the questions people like me will invariably raise.

The mall is the second largest in South Korea and is on one edge of sprawling Seoul. That big video tower appears heavily sold by specialty leasing for event marketing and product launches, with pop-up stages and AV, and the wall as a giant video background. It is a concept I was pushing on an owner of numerous shopping malls several years ago – but LED was just starting to be an indoor  thing and the costs were too high. They went the billboards on walls route instead, bankrolled by a media company.

Larger malls do a lot of special events like fashion shows, celebrity appearances and “activations” for things like credit cards and new motor vehicles and gaming devices. A LOT of time and money goes into setting up and tearing down all the AV, and dissuades field marketers from getting too ambitious. But if a giant video wall and audio are already in place …