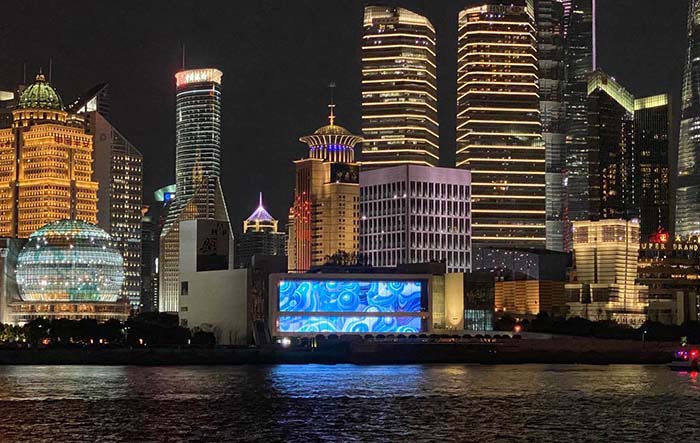 A new museum that’s opened along Shanghai’s famed riverfront features a huge LED video wall that is easily seen by looking across Huangpu River from the Bund at the ultra-modern skyline.

In a press release I would politely call confusing as hell, Chinese LED manufacturer LianTronics relates the story behind “Shanghai’s Largest Outdoor Small-pitch LED Wall” – which based on the images provided is actually inside the museum building. So you could say outdoor-facing. Just to make me more confused, the indoor display is described as IP65-rated, which means it can handle a spray from a water jet, which as you know happens all the time in art museums???

LianTronics also manages to call the display both fine pitch and small pitch. It’s 3mm, so that is most accurately described as small pitch, or borderline fine depending on who you ask.

The Museum of Art Pudong (MAP) is composed, says LianTronics, of two pieces of “giant glass” curtain walls in the depth of 5 meters, the width of 55 meters and the heights of 12 meters and 6 meters respectively. “LianTronics-made giant small-pitch screen just stands behind the “large glass”, with a total area of 800 sq.m. Far beyond 10K standard resolution, the huge LED wall carries nearly 86 million pixels to open a window to present the remarkable masterpieces of world art.”

As far as I can tell from the description and images – and I could be wrong here – the big LED wall is set back from the main curtain glass wall by about 15 feet, and has a second curtain glass wall in front of it. “The 10cm distance between the video wall surface and the glass has prevented us from touching the screen surface and limited the operation space for us.”

It appears the video wall is actually separated by a floor, explaining the 12 and 6 meter heights in the description.

I’m nattering on about the shaky description because I think clarity is a good thing in helping sell one’s pots and pans. Having said that, it’s impressive project, just based on the images.

There’s a second, somewhat unique LED installation tied to the museum. An irregular set of displays set in a cube atop the building uses LED displays, as well.

“Besides the giant “Grand Verre” LED screen, there is another creative LED cube made by LianTronics in the shape of the Museum’s logo. More than 100 special-shaped displays are perfectly embedded into the top of the building to form the pattern of “MAP” and QR-code-like part to simulate Chinese character of “福” whose meaning is “luck” in English.” Have not been to Shanghai, unless you count changing planes at the airport, but would like to see that skyline one day.